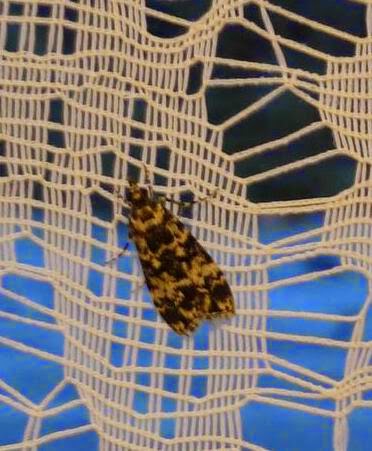 Hello. It's been a while!

Spring is here in the Yellow Wood and my attention strays as always to the very tiniest of beings.

A beautifully striped moth in the bathroom. 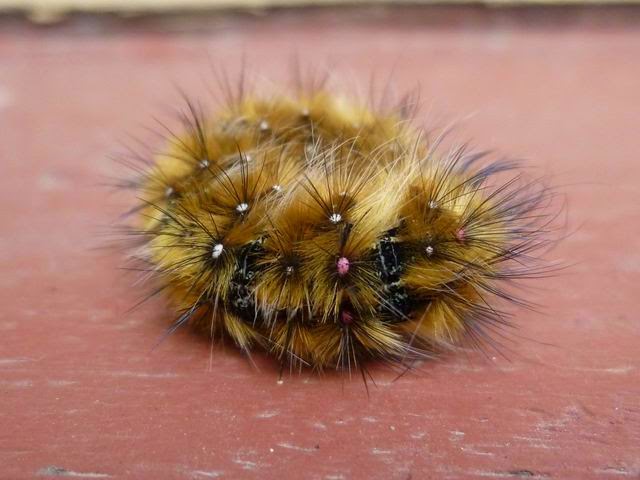 A delightfully furry caterpillar on the front windowsill. 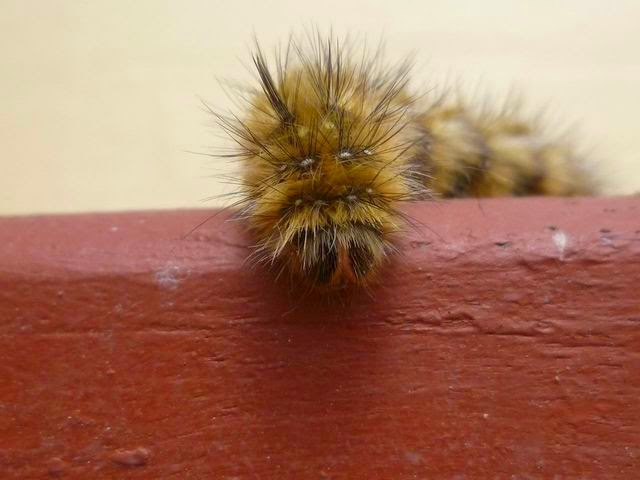 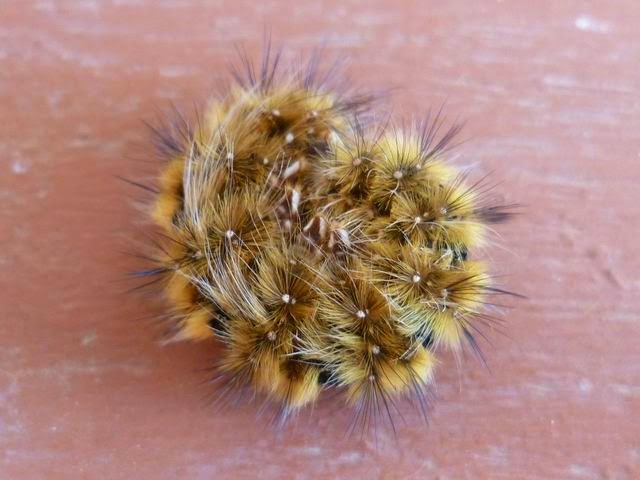 A daddy-long-legs exploring on the porch. 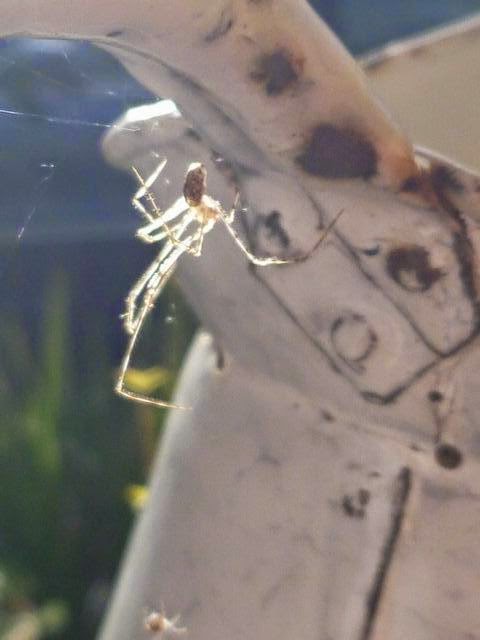 I hope the world is treating you well wherever you are.

Labels: At home, In the Garden, News from Nowhere, Spring

Girl in the Yellow Wood 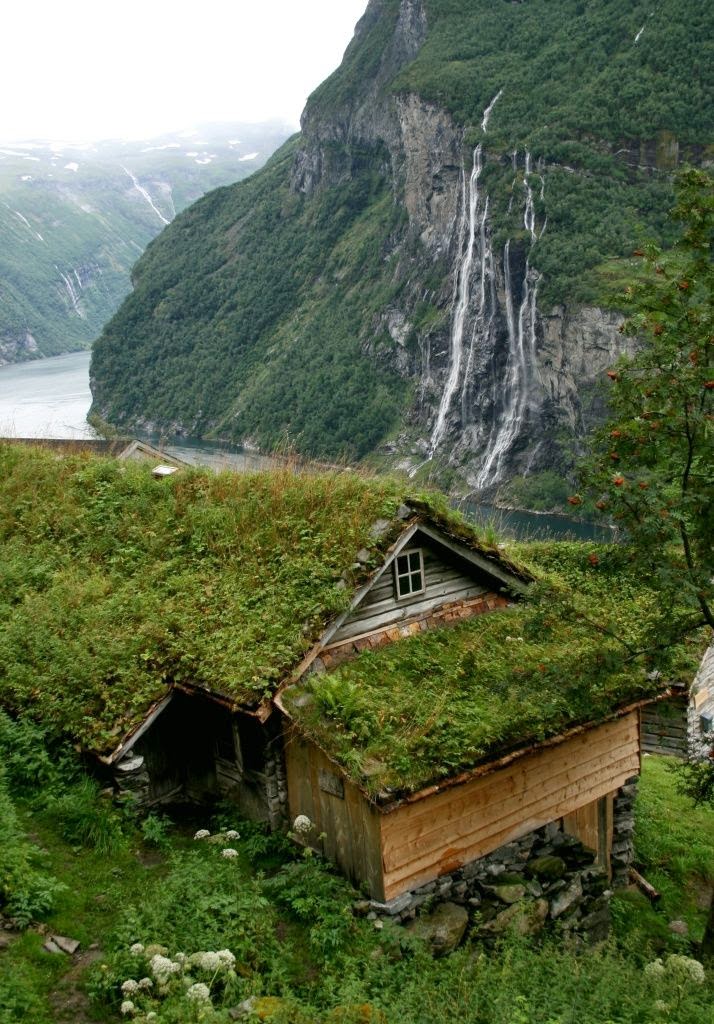 This is in Sunnmore, Norway, and it is one of the pretty-prettys I've been pinning over on Pinterest...

Once again I must make my true and sincere apologies to you for being so absent from this space.

As you know, there is some difficult stuff going on in my life right now. To quote John Lennon, "Life is what happens to you while you're busy making other plans".

Added to that, I have felt for a little while that things as they stood here in the Yellow Wood have been getting a little stale, so I have been wracking my tired little brain for ways to freshen things up a bit. For one thing I am now pinning all manner of bits and bobs that I like on Pinterest, so if you'd like to take a look, do come on over to...

Until then, I hope all is well with you on your path through the Woods, and hopefully soon I'll be back with another little idea... 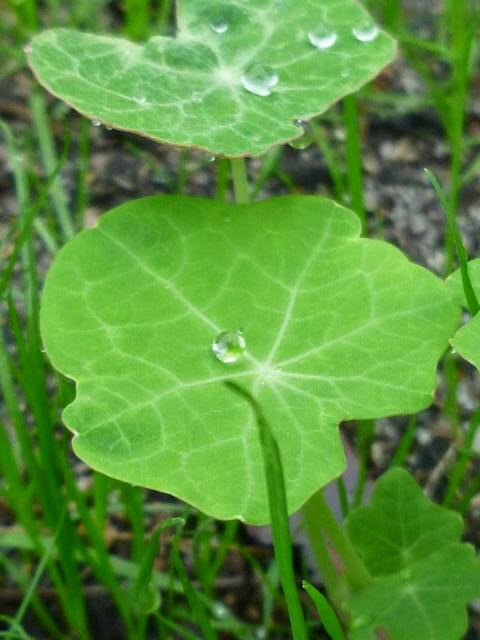 Summer has at long last left us - very late, this year. Although we are moving towards winter, it always seems to me that everything is so much more alive right now. Rains dampens and soothes the dry ground and all sorts of plants dare to show their faces without fear of being charred by the sun!

So it is that nasturtiums are starting to peek through the new grass on our newly-made terrace in the backyard (one day it will have a thick thatch of grass and we'll set up a table and chairs there) and our sadly useless passionfruit vine is shining with raindrops (I say useless in that it produces inedible fruit). 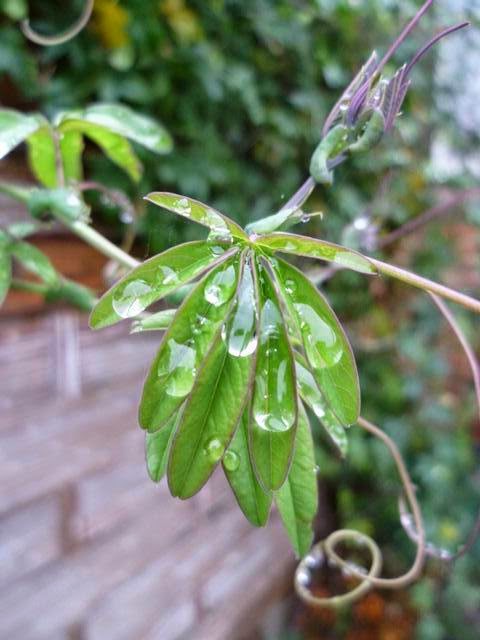 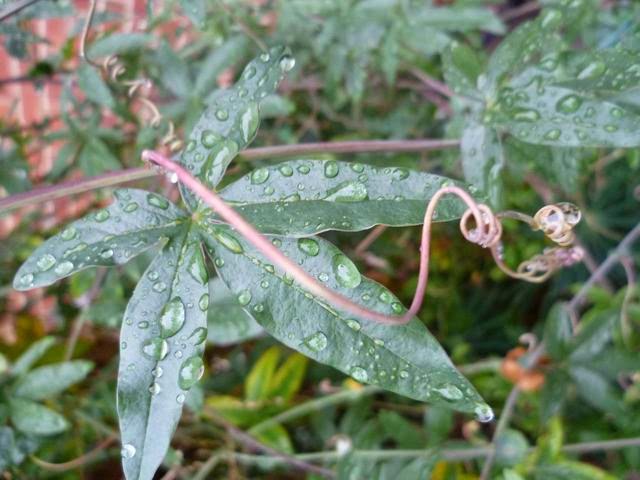 Posted by Feronia at 3:54 PM No comments:

Labels: At home, In the Garden, Seasons 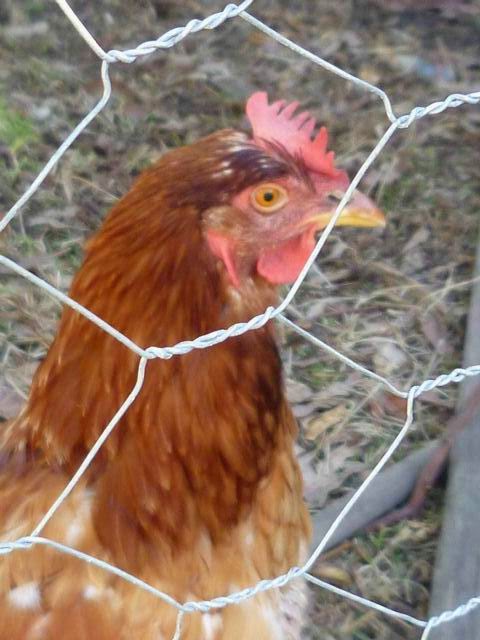 One of our three beloved chickens - Joyce - has spent the last month and a bit brooding. I had no idea what this actually meant and when she first retreated to the coop to sit in her box, we were worried. She hunched in on herself and fluffed up all her feathers. She emitted sad little noises and her comb was red-hot. This is not good, we said to ourselves, certain that one of our previously happy little crew would not be with us by morning.

Then we did a little bit of reading. This was brooding, in which a chicken imagines that she needs to stay in her nesting space all the time to hatch eggs. Really kind of sad, when you think about it, guarding and nurturing eggs that don't exist or aren't hers (because, ironically, they stop laying). Poor love. And she would not move, except under considerable protest, when I lifted her out of the box and into the yard during the day. Otherwise she wouldn't have eaten or drunk any water. This went on and on and we read some more - leave her be, she'll come out of it in no more than three weeks. Three weeks passed, then four and nearly five. Oh, my aunt said, you just dunk them headfirst in cold water! That snaps them out of it! We were horrified at the thought of little Joycie receiving such torture, especially in her delicate and rather melancholic condition, but eventually it had to be done. Prolonged brooding has its own consequences.

And so it is that she has now emerged back into the yard to resume her daily frolic with her coop mates, Gladys and Jean. She is now moulting - an after-effect of brooding, apparently - but it's good to have her back. Unfortunately we have now had to build a little enclosure for the chickens (hence the chicken wire above) because they were gradually digging up the entire garden but even in a slightly reduced space, they still seem to be having a lot of chickeny fun!
Posted by Feronia at 3:38 PM 4 comments:

Labels: At home, Chickens, In the Garden 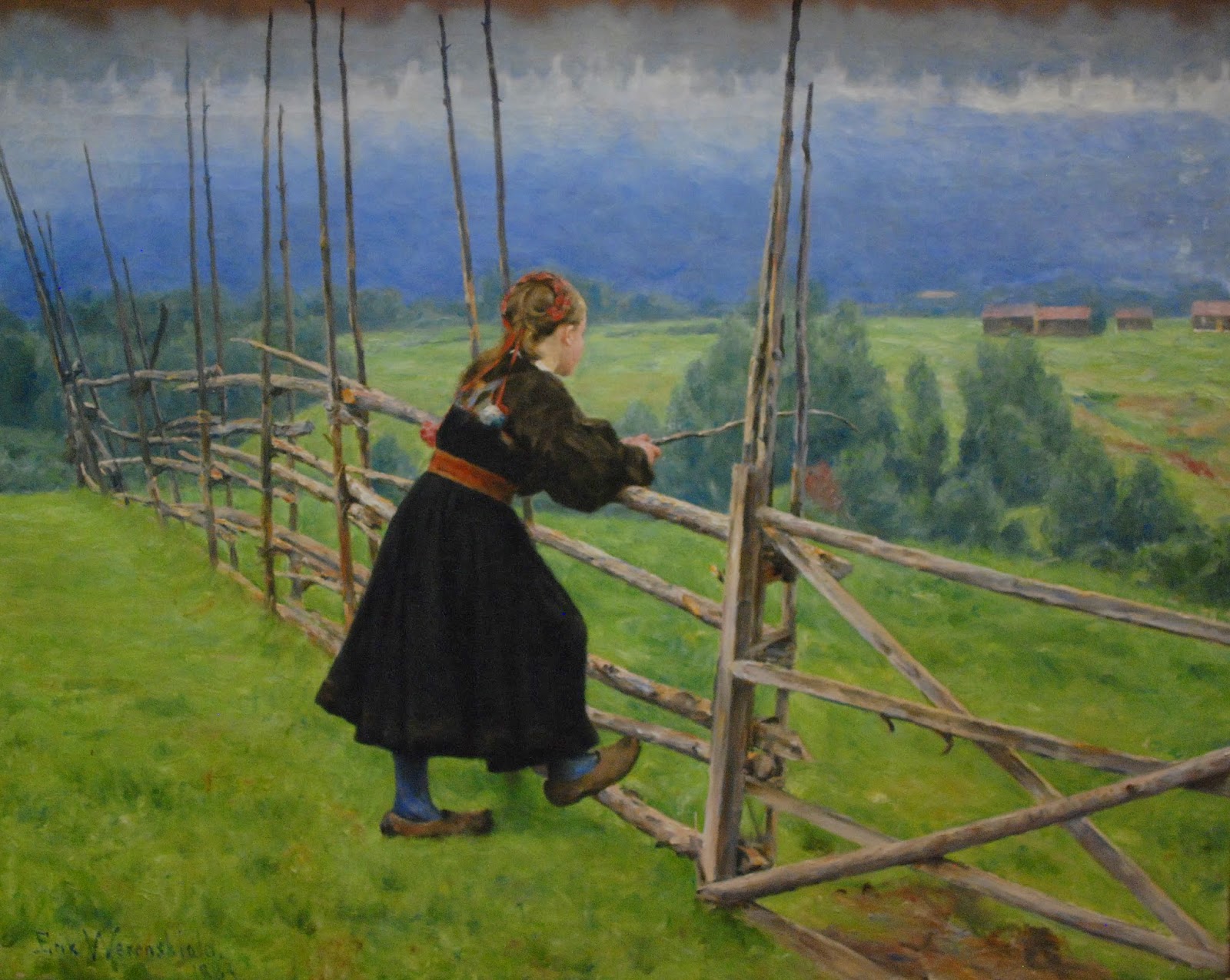 Erik Werenskiold, On the Plain

Hello! I am truly so sorry to have been away from the Wood for so long. Suffice it to say that 2014 has not been the best of years for our family so far.

But we persevere, because it's all we can do. It's all any of us can do. I am literally taking things from one day to the next at the moment, never looking too far ahead, and so I thought it would be good to take a look at what I am doing right now.

Making: A knitted poncho for Joyce, one of our chickens (poor baby is moulting badly)

Enjoying: The slow arrival of autumn

So, what's occupying you right now? 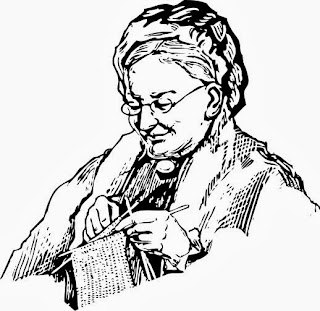 I am assuming that by now you've worked out that I kinda like all things vintage. And I've reached an age where I'm thinking 'Damn it, I like it. I'm going to wear it.' A lot of people probably reached that age before me, but what can I say - I'm a late bloomer. But some caution is still necessary. Because as much as I adore vintage, there is always the danger of looking like your grandma unless you are very careful and bear in mind that it is not actually 1940 (or 1930 or 1830 or whatever your chosen era may be).

I know 'Granny Chic' is a thing and for girls of a younger age and slighter build than myself, it can look kind of cute and quirky. Loveably eccentric. A little bit Annie Hall, maybe even a little bit French. But for me? Hmmm. As much as I do like kilts, tweed and floral dresses (and I do), how you wear vintage can make a lot of difference!

So it is that I began to think last week, 'I would love a 1940s-ish handbag'. But then I started to think about those handbags. You can't put them on your shoulder, they have those bitey little clasps and they look like they should be full of peppermint sweets and pictures of grandchildren. So I consulted the excellent http://www.landgirl1980.co.uk/ blog for inspiration. And then, oh yes...a satchel. Of course! Cute, practical and with a little bit more...well, you know. After then conferring with Mr Google, a 'Cambridge' satchel seemed to be the go, but the prices (in British pounds!) left me recoiling in horror. Until I found this little treasure on Ebay for under $20. Happy days. 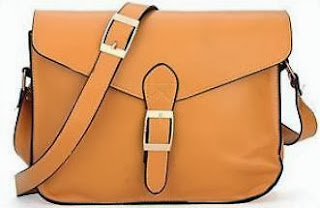 Vintage with a little bit more cute and a little bit less mothball. How do you wear vintage?
Posted by Feronia at 12:05 PM 4 comments: 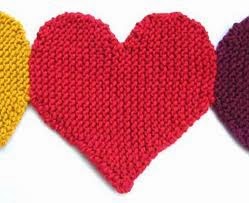 Hello! I'm so sorry for my absence these last few weeks. I've missed being here. I hope that you had a lovely Christmas and I truly wish you every good thing for this new year that is spreading out invitingly before us.

Here in the Yellow Wood, I have had a quiet time, taking it slowly and as calmly as I can, while the sand shifts beneath our feet.

The comforting and familiar has had my firm and grateful attention...I have been cooking some good and simple dishes from the wonderful CWA's (Country Women's Association) Family Meals. Kedgeree, quiche and orange cake. So very good!

Knitting has me preoccupied again...will I ever graduate beyond garter stitch? I sometimes think I have the knack of another stitch and then it skitters away again (laughing a little at me, I think)...!

I am reading and falling in love with Elsie J. Oxenham's Abbey Girls series. Wonderful! They are like book length conversations with Call the Midwife's Chummy!

So, what's been keeping you busy?

Hello and Welcome to my Corner of the Wood!

Hello and Welcome! I hope you enjoy your stay here. I love receiving your comments so please take the time to leave one if you would like to. I hope to see you wander by again soon.

My Etsy Shop - In a Yellow Wood

My Etsy Shop - In Dark Woods